I was recently asked if I’d like to attend a course at the School of Artisan Food located in the Welbeck Estate in North Nottinghamshire, to write about one of

the many food courses that they offer. After looking through many of the courses on offer from: French baking, Italian baking and pizza making, Pig in a day, Introduction to flatbreads and Make your own afternoon tea to name a few, I decided that it would be interesting to learn more about a range of British Pies as I felt that I should do a course for a food ‘style of cooking’ that I enjoyed eating when out as then I could really assess the course and what was produced as well as (hopefully) re-create some of my own delicious ls at home as a result of the course. The course itself is usually priced at £195 per person for the full day course. The school aims to teach about all aspects of artisan food production and gives people of 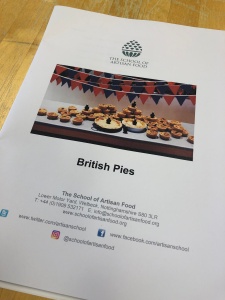 differing skill levels and experience the opportunity to expand their knowledge. The school itself is housed in the former fire stables and their newly refurbished rooms are equipped to teach multiple skills such as breadmaking, brewing, butchery, charcuterie, cheesemaking and preserving. The school has an outstanding reputation and the expert training from experienced artisan producers had me looking forward to the day ahead.
The outline for the day was as follows; 9:30AM – arrival and registration with refreshments provided. 10:00AM – learn about sourcing, ingredients and different pastry types as you begin to create a selection of pies. 1:00PM – A buffet style lunch which has been prepared by their team of chefs. 2:PM – Finish creating the pies and learn more about a variety of fillings. 5PM – the course finishes for the day.

a schedule for the day along with a selection of recipes for the pastry we would be making that day and a selection of fillings for the various pies we would be crafting. As I waited for the course to begin, I got talking to some other ‘foodies’ and it says a lot about the quality of the courses and the prestige of the school of Artisan Food itself that amongst the 11 of us there were 2 people who had already attended courses previously as well as a few others who had travelled a fair

distance to attend the course, coming from Solihull and Hertfordshire. As the course began, we went through to the kitchen room where we would spend much of the day preparing our pies in a large, spacious, modern and well-resourced kitchen area. We were given School of Artisan Food aprons to use and keep and our instructors for the day; Chris Moorby (an expert butcher) along with his son Tom Moorby introduced themselves before explaining what we would learn on the course.
To begin with Chris gave us an overview of the different pastry types we would be making along with the key ingredients used and techniques that are effective in making the different types of pastry and pies. He then began by 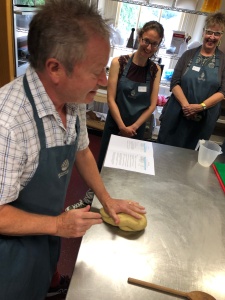 creating a boiled water pastry to house our pork mixture for our pork pies that we would be creating. Straight away it was clear that Chris had a depth of knowledge about all things pastry as he spoke with clarity about the process and methodology as he explained the importance of melting the lard and water together before he combined this with a mix of strong plain flour and salt. Once combined and cooled slightly, he completed the mixing process by hand but explained very carefully that we shouldn’t over work the pastry. After answering any questions, we had he was on hand as we began to create our own boiled water pastry in 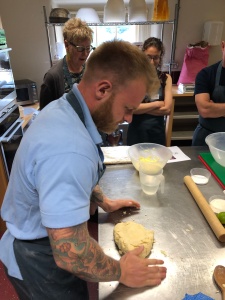 pairs. Once we had done this, we covered with cling film and left it in the fridge to cool. Next, Tom demonstrated how to create a rough puff pastry but as we went through the process, he asked different people to do the various parts of the pastry making process. This was really useful as it kept the course hands on whilst also helping people to develop their skills. As the pastry was being completed it was really interesting to hear the science and importance of creating the layers of fat ‘butter’ in the pastry to allow the creation of layers for an effective puff pastry. Following this, Tom showed us how to create a chicken and mushroom filling for the pies we were 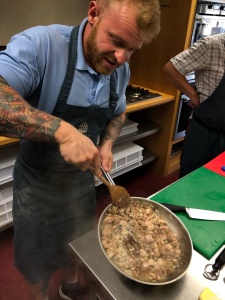 going to construction later that day. The demonstration was really clear as he explained and modelled each part of the process adding tips and advice along the way to create a thick and creamy sauce for the chicken and mushroom with the use of flour and double cream to create a more substantial sauce. After this we busily set off creating our own chicken and mushroom pie filling before placing baking parchment over our cooked mix to prevent a skin from forming on the top.

After our boiled water pastry had cooled, we set about making our pork filling. Skilled butcher Chris Moorby was fascinating to watch as he shared his 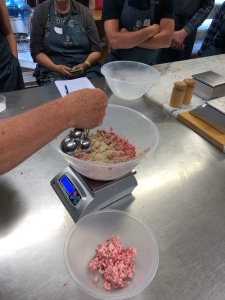 expert knowledge to help use create a perfect pork pie. He spoke about the importance of using 80% lean pork mince and 20% fatty pork mince in order to create a moist and flavourful filling. To this he incorporated some salt and freshly ground white pepper. It was great to learn about other variations of seasoning as well as the importance of getting the pork from a high-quality butcher as meat that had been minced more than once would result in a texture not as desirable for a pork pie filling. After doing this, Chris showed us how to raise the pastry around a ‘dolly’ a wooden shaped cylinder to press down on the pastry. It was important to

press down carefully so that we could see daylight through the base before pressing it up the sides until it reached the top. (He also pointed out that if you didn’t have a ‘dolly’ at home, jam jars also work well). After we had followed his demonstration, he showed us how to put the pastry on the top using a variety of crimping skills to create a different finish with one being similar to that used in a traditional Melton Mowbray pork pie. After this we egg washed the pie before placing in an oven to cook through and until the pork reached around 80 degrees Celsius.

At lunch time we had a buffet style lunch which consisted of a cheese and caramelised onion quiche, beef with Stichelton mayo, mixed green salad,

bean and tomato salad with a wholegrain mustard dressing, a beetroot salad, coleslaw, roasted paprika potatoes, cheese and pickles and student breads. Each of the several buffet items was of exceptional quality, with the incorporation of fresh, well-seasoned ingredients. The stand-out items being the light pastry of the quiche with a creamy and sweet filling from the caramelisation of the onion and the paprika roasted potatoes with a dark brown exterior with a smoky and spicy flavour with a fluffy centre. Further to this it was great to sample some of the student’s baking to mix with the cheese selection on offer. The Stichelton was soft and creamy yet packed full of flavour.

To begin the afternoon, we further developed our pastry skills as Tom showed us some essential techniques to create the perfect suet pudding pastry. He 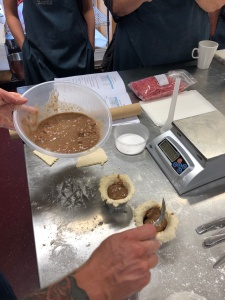 began by telling us a bit about suet and why it is effective in creating the perfect texture and taste for the pastry. Next, he emphasised the importance of not over mixing the pastry and only touching with your hands at the very end to prevent the suet from melting with the increased temperature from your hands. He also mentioned a few times about working the pastry into the shape that you want to save time and effort when placing it into the tin to bake it. Once we had created our own suet puddings, we were given a pre-made mix of steak and kidney to add to the pie before we were shown how to place baking parchment over the top to allow the pudding to steam perfectly when we needed to cook the pie. Next, we were shown how to create a short crust pastry, which again was expertly modelled and added real value compared to following a recipe from a book. Both Chris and Tom added useful tips and advice to create a problem free

pastry that wasn’t over worked and would bake well when placed in the oven.
To the 2 short crust pastry pies we made we added a mix of steak and ale filling (which was made the day before by the school to ensure that it was tender). After doing so we were supported in adding the pastry topping ‘lid’ to our pies along with techniques for crimping the edges of the pie. The final pies we needed to assemble as part of our day making classic British pies was the puff pastry topped pie that we would have our chicken and mushroom filling in that we had made earlier that day. Once the filling was placed in the tins, we were given some of the puff pastry we prepared as a group earlier as part of the demonstration and placed it over the top pressing it down around the edges of the tin to secure it in place.

Once the pork pies were out of the oven, Chris showed us how to add the gelatine into the top of the pork pie to stop it from drying out. Although we 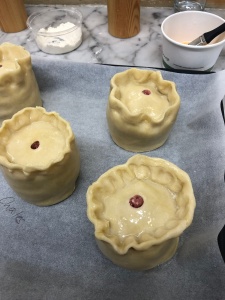 were given the gelatine in a tub to do ourselves at home as doing this at the venue would have meant the jelly would still have been in liquid form which is quite messy to transport home.
At the end of the day we placed our pies into containers which we had been asked to bring to save on plastic waste (although they did have some containers if you needed them). The course was really entertaining and I certainly developed my skills as a result and the expert advice from Chris and Tom was definitely important in supporting us to create a range of perfect pies and made for a wholly enjoyable experience.

To conclude my experience, I will talk about the pies I made. Well the proof is in the pie ‘pudding’ the pork pie looked great, traditional in style with a great

finish from the crimping of the pastry. As I cut into the pie the pastry was firm and crisp with a thin layer of jelly and a moist pork filling which was well seasoned with the white pepper and salt. The shortcrust steak and ale pie was light, crisp and golden on top and crumbled perfectly as this pastry type should and held the rich and tender steak filling in well.
I attended the course free of charge in return for an honest and helpful review. However, the review is an entirely honest and true reflection of the

day. Despite my initial thinking that £195 for the course was a little on the expensive side, I do feel that for the experience, length of the course, support of professional chefs, ingredients and the lunch that is provided it is justifiable and would make an excellent present for a foodie as there are just so many courses on offer which cover a wide range of skills and tastes. Since attending the course, I have looked at booking on another course at my own expense as I thoroughly enjoyed the course and found the skills that were taught worthwhile.

Opening hours: (Vary depending on the course booked)