Recently I have been searching for good quality food that can be delivered to your home using takeaways. However, many offer poor quality food or rarely deviate from the standard kebab or pizza, which although acceptable for a night in, does not offer much variation in choice for those ordering. So when I came across Medi Mex who claimed that they offered freshly prepared Greek and Mexican inspired dishes from their Nottingham based takeaway I was intrigued to see how they would compare to restaurants that offer similar dishes.

industry for around 30 years. Medi Mex itself has been going for around 4 years now and is building a strong reputation of being a producer of good quality takeaway food. They take orders via their website, however they also cater for large parties and buffet events. They state that it may take a little longer when ordering from them as they prepare the food as and when it is ordered. My order arrived in around an hour, which I felt was pretty good considering it was made to order and it had to be delivered too. 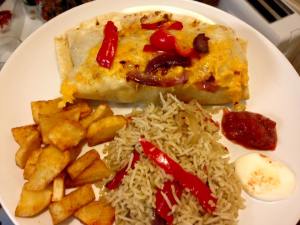 cheesecake. You got two enchiladas that were a good size and well presented. They were topped with red peppers, red onion, chilli flakes and melted cheese. Wrapped in a soft and fresh tortilla was a mass of red peppers and onions, along with tender and even sized chunks of chicken that were both moist and well seasoned. The chicken just fell apart and each bite was flavourful with an added crunch from the peppers and onions. I had this with a mix of the Mexican rice and patatas to add more flavours and textures to the dish.

The chimichangas were topped with a sprinkle of paprika, red onion, red

peppers and melted cheese. You got four triangular shaped parcels that were filled with a finely minced beef that was well seasoned with tomatoes and the spice of chilli. Overall they were very juicy and the pastry was soft. Again I had a mix of both the Mexican rice and the patatas with this dish. The rice was perfectly cooked and had red peppers and onions mixed in with it. The rice, as with the other food that I sampled, was perfectly seasoned and had a good amount of heat to it. The patatas were lightly seasoned in paprika, slightly crispy on the outside and light and fluffy on the inside.

For dessert I had a cake that was similar to cheesecake. However it had a

light and moose like texture to it. The base was crumbly and worked well with the light strawberry flavoured topping. Overall I was very impressed with the quality of the food that was delivered by Medi-Mex, although I preferred the main dishes to the dessert.

You can order from Medi Mex through the Just Eat website and they deliver to the following areas: NG1 Nottingham, NG16 Nuthall, NG2 West Bridgford, NG3 Sherwood, NG5 Redhill, NG7 Nottingham, NG8 Bilborough, NG9 Bramcote. Unfortunately collection is unavlabable and there is a £1.50 delivery charge when ordering. Orders must be £15 and over.