Rakki Rakkas is a Turkish restaurant in the heart of Sherwood, Nottingham that has been open just over a year now. The addition of Turkish cuisine certainly adds to the strong gastronomic dining scene in the Nottingham suburb with Polish, Indian, French, Italian, Caribbean and Spanish restaurants amongst those already well established in the area.

Rakki Rakkas is located on Mansfield Road in Sherwood, next to the popular French restaurant Le Mistral. It first opened in July 2017, so I thought I’d better get around to reviewing this popular, fairly new, venue. With the restaurant’s name Rakki Rakkas in brightly lit neon lights at the front of the venue it seems like a takeaway with a large class cabinet housing an array of skewered meats, salads and dips. Beyond this there is ample seating for around 50 guests and a bar area towards the back of the venue. Behind the glass cabinet you can see much of the food being freshly prepared, which is always a good sign. The restaurant is filled with the aroma of the freshly grilled meats. Although the restaurant can feel a little clinical in its design and layout; it is a clean, comfortable and spacious venue to dine in.

were taken shortly after. After spending a couple of minutes looking through their impressively extensive menu we decided to go for the Rakki Rakkas special 1. Recommended for two people this consists of lamb shish, chicken shish, Adana kebab and mixed doner served with bread, rice and salad. In addition to this we went for a traditional humus made from the standard chickpeas, sesame oil, garlic and lemon juice. Shortly after, three dips were brought over to our table to complement our meal. These were; a homemade chilli sauce, a mix of aubergines and peppers and a yoghurt and cucumber dip. A basket of freshly warmed flatbread was also given to us. The bread was served warm and doughy with a slight char. The humus was smooth and creamy with a light citrus zest from the lemon and it wasn’t overly oily either (which humus can sometimes be). The chilli sauce was mild but added flavour and something different when mixed with our meal. The aubergine and pepper dish was mild and served cold and had a very sweet tomato taste to it. This consisted of a thick sauce with cubed potatoes in it. The last of the three dips was the yoghurt and cucumber dip which was very similar to the Greek favourite tzatziki. It was creamy with thin strands of cucumber with a slight sourness to it. However, the presence of garlic was a lot milder compared to tzatziki.

A short while later our main meal arrived. A platter, or should I say mountain of meat topped with peppers that had been roasted on the grill to intensify 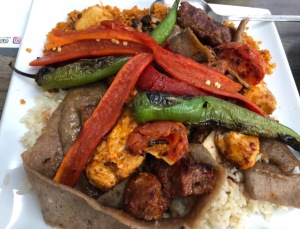 the flavour. Juicy lamb shish that was bursting with flavour. The meat had a very smoky depth to the flavour from its preparation and cooking method. Everything was flavourful, juicy and not at all dry. The meat had a slight char to it from the grill which added further flavour and texture to the meat. At the base was a mix of rice. Served alongside our main meal was a side dish of salad; a vibrant mix of pickled cabbage, chopped tomato, cucumber, red onion and fresh crispy lettuce topped with chopped coriander and served with a lemon wedge for extra tang. This complimented the main meal well and offered a sharp but sweet taste against the chargrilled succulent meats.

Aside from the food we ordered, their menu has a great range of hot and cold starters with items such as grilled Turkish sausage, falafel to items such as 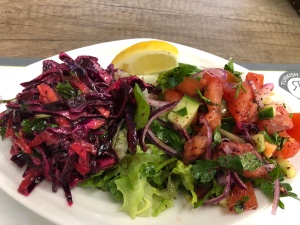 olives, vine leaves and feta cheese. On the main menu they have a great choice of grills from simple grills such as lamb shish, lamb ribs, chicken wings, lamb doner, fish shish and sirloin steak to name just a few. They also offer their grilled meats in wraps or served in a different way from a selection of chef’s choice specials. Vegetarians are also catered for with musakka, veg kebabs and halloumi kebabs also on offer. For fussier eaters or children they do a beef burger, chicken fillet burger or chicken nuggets all served with chips.

This meal was paid for by myself and I turned up without notifying the venue. As with all reviews, I hope this is an honest reflection of the food and venue that will be useful to others.