I recently attended a food bloggers ‘fundraising dinner for the Stroke

Association UK. The event was organised by one of my friends Adam Hayes who suffered a stroke two years ago and is now a great advocate for raising awareness of the symptoms of a stroke (F.A.S.T. – face, arms, speech and time) as well as raising vital funds. The night bought together local people who had paid £22.50 for a three course meal plus canapés in a bid to raise money for a great cause. The event was hosted at Adams College, Nottingham, which is responsible for training chefs and waiters for the hospitality industry so what better practice than to offer them a real life scenario by hosting this event.

The event was well supported by Nottingham and Midlands based

businesses with multiple bars and restaurants giving prizes for the raffle to increase the funds that were raised, these included Red’s True BBQ, Rubs Smokehouse, World Service, The Rum House and many well regarded venues. The Rum House also offered their talented bar tenders for the evening and were on hand to make delicious cocktails using the kindly donated Jailor Jerry rum. Whilst enjoying a thirst quenching rum punch we were treated to a selection of flavourful and well presented canapés, which included smoked salmon pate, terrine and a golden, runny quails egg.

For each course there were diverse options to suit different tastes and pallets,

Once seated, we were given a freshly prepared bread roll that was served

with a selection of flavoured butters, including rosemary and a chilli butter. The service was very polite and attentive and our starters arrived quickly. From the starters I went for the crispy pork belly, honey and soy dressing, oriental vegetables and toasted sesame seeds. The pork had a good balance of textures and tastes and the trimming of some of the fat sure that it was not overly heavy or fatty. The top of the pork belly was very crispy and golden on the top and this added a nice crunch to the dish, with the flavours from the meat emphasised by the sprinkling of salt on the top. The rest of the meat was tender and rich and the sweetness from the honey worked well to contrast with the saltiness of the pork belly. The rich soy in the sauce worked well with the other flavours and textures of the fresh crispy vegetables. Overall this dish was well presented and a good portion size for a starter. 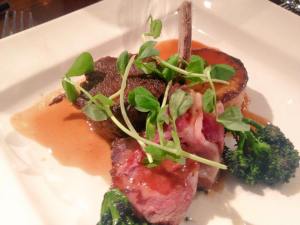 asked how our food was. For my main course I went for the duo of lamb; braised shoulder and pink cutlet, rosemary fondant, purple sprouting broccoli and redcurrant jus. The braised shoulder was crispy on the outside although the meat was very tender; the shoulder had a great depth of flavour and was very moist which was combined with finely diced carrot and celery. The cutlet was tender and juicy and pink as described. The smooth potato rosemary fondant made a nice change and added a nice twist to the dish. It was well seasoned with rosemary which flavoured the potato well and complimented the lamb perfectly. The jus was nice and flavourful, however the option of a pot of jus would have been good as there wasn’t much jus on the plate. Once we had finished our plates were once again taken quickly and we were asked how our meals were, this was in keeping with the high calibre of service that was consistent throughout the night.

For dessert I had the chocolate and cherry black forest. The execution of

this dish was outstanding. Each element of the dish worked well both aesthetically and in terms of taste. The chocolate was moist and rich and complimented by a smooth and light moose. The dish was finished with finesse with the addition of a toffee glazed cherry on top.

The evening was excellent and well presented and the students at Adams College did themselves proud. Set in a very nice historic building the Adams Building is home to the Adams chef college restaurant that sees many trainee chefs and waiters learn their trade in a well set out and spacious fine dining type venue. They have differing themed menus in the evenings and are open for lunch during term times. They are certainly worth a visit so check out their website for more information about their college and food.

Opening times: The restaurant is open for coffee from 10am and lunch from 12pm till 1:30pm in the week and dinner on Wednesday and Thursday from 6pm till 7:30pm.